Hundreds of people lined the streets of Wolverhampton city centre to welcome the 1st Battalion of the Staffordshire Regiment (Prince of Wales) back from Iraq. The Staffords will never again march through the city. 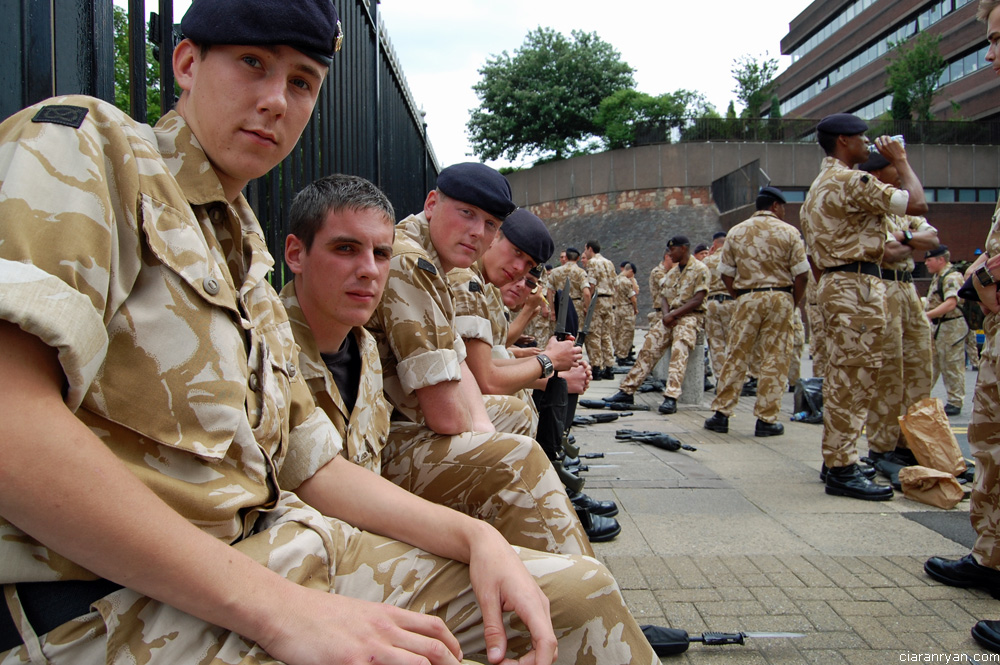 It was fortunate that the Staffords’ train delivered them to Wolverhampton with time to spare.

As the young men in camouflage uniforms walked from the city’s railway station to the start of the parade route they were often waylaid.
Teenagers shook their hands, workmen wished them well, pensioners and old soldiers stopped them for a chat and to reminisce.
It’s no suprise that the Staffordshire Regiment are greeted warmly by the people of Wolverhampton. The city’s got strong links to the Staffords – the local Infantry Regiment for the County of Staffordshire and the Black Country. 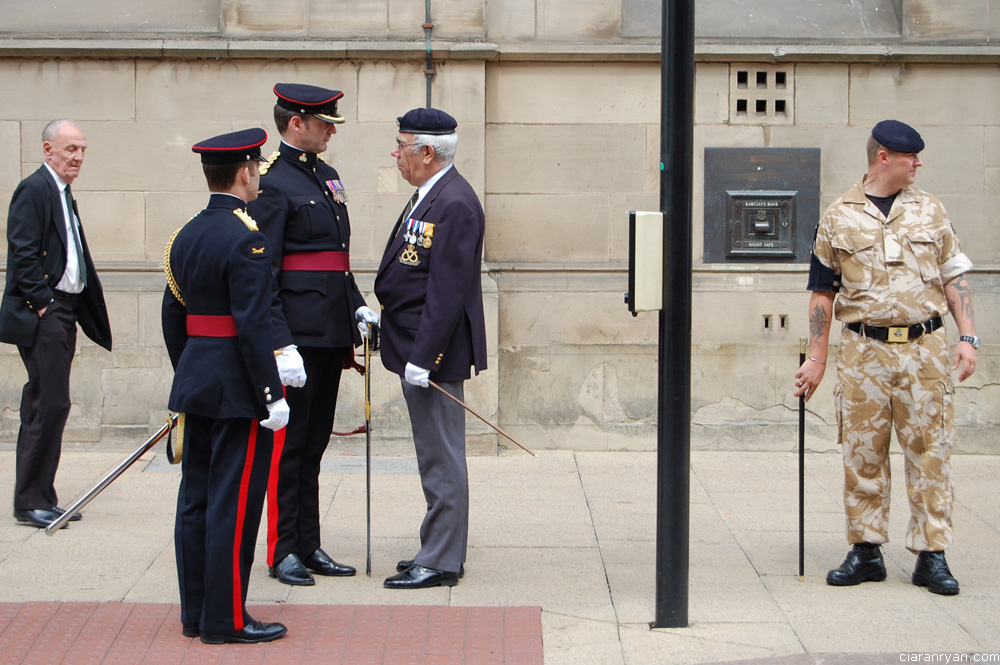 For more than 300 years the young men of Staffordshire and the West Midlands have joined the regiment. It took them far from home and into the heart of the worst conflicts.

The Staffords took part in the American War of Independence, the Crimean War and the Persian War. They fought in the two World Wars and, of course, most recently in Iraq.

The regiment lost three soldiers during their first tour in Iraq. In March, on their second difficult  tour in Basra, Private Jonathon Wysoczan, 21, was killed while on patrol.

Their last parade through the city 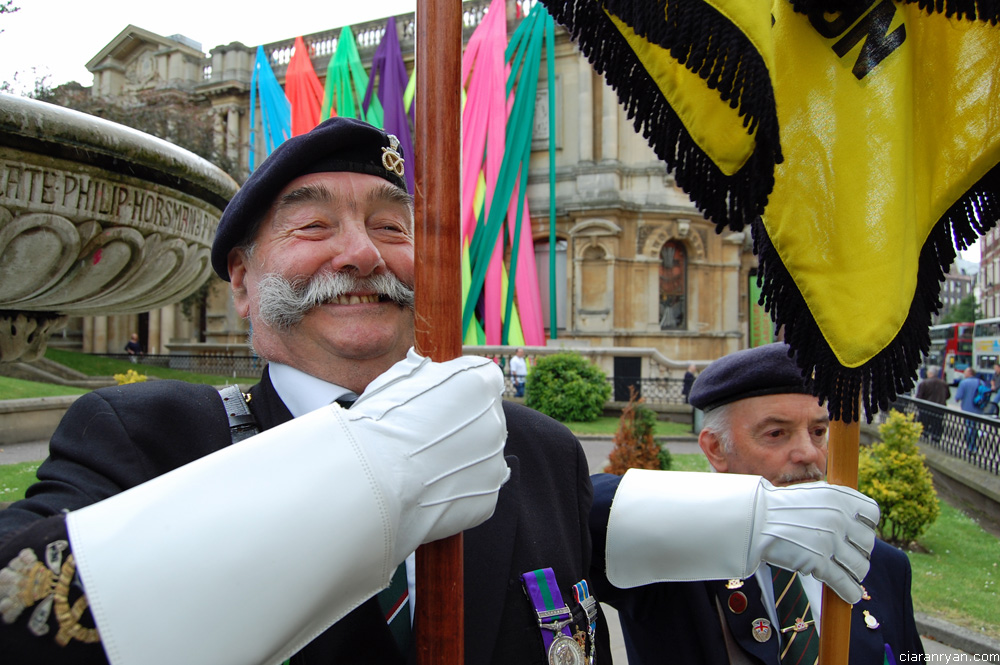 Today, Wednesday 13th June 2007, the Staffords’ marked their return from Iraq with a parade through Wolverhampton’s streets.

This parade is  the last time that the Staffordshire Regiment will ever march through Wolverhampton. In September 2007 they will merge with other regiments to become 3rd Battalion, of the Mercian Regiment.

Patrick Shepherd is one of the former Staffords who lined the route to watch the march.

“We did the Freedom March [through Wolverhampton] fifty years ago” he said. “It was on the 6th of August 1957, when we came back from Cyprus. There were crowds everywhere. It was in the papers that we were coming home and people turned out to see us.” 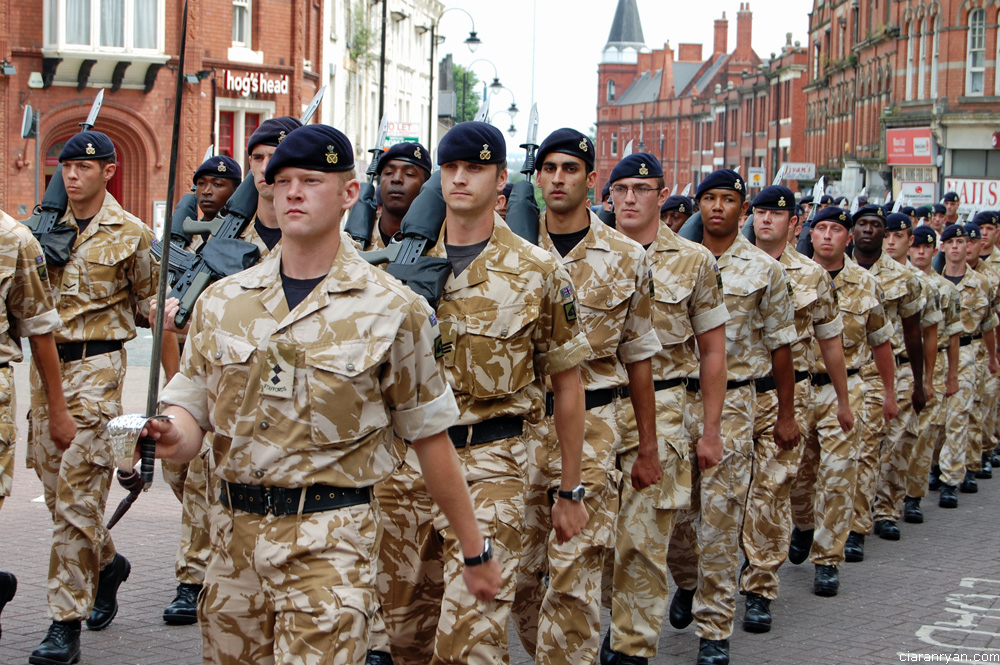 The soldiers marched to the beat of drums and a chorus of alarms as the stomp of their boots upset parked cars.

Three hundred men of the 500-strong regiment, bayonets fixed, and acting as one body.

They marched for twenty minutes through Wolverhampton city centre.

People lined the streets and clapped and cheered. Workers hung out of their office windows. Women wolf-whistled at the men in uniform.

The soldiers are sons and brothers, husbands and fathers and this event was more than a march – it felt like a family reunion.

“This is a very enjoyable occasion” said Lt Col Tim Sandiford, standing outside the civic centre. “We’re taking the opportunity to thank the people of Wolverhampton and the West Midlands for their fantastic support that we’ve had through out our time in Iraq.”

Lt Col Sandiford is clear why the regiment is special.
“It’s the strength of the bonds that tie us together. It’s the strength that we get from recruiting from the same area. All knowing each other and all being friends. It will be very difficult to replace.”

He continued: “We become 3 Mercian later this year, but we continue to carry the title Staffordshire after our name, so although the cap badge will change, and that will be a sad day for us, what will not change is the spirit of the regiment.

“I am absolutely convinced that the 3rd Battalion of the Mercian Regiment will be as well regarded by the people of Staffordshire and the West Midlands as the Staffords are now.”