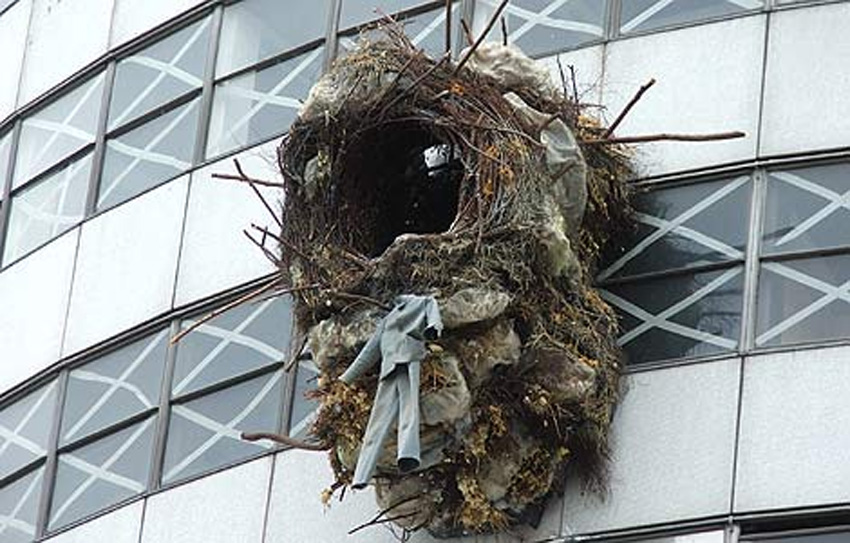 He came. He saw. He nested. He laid an egg, then plummeted to his death? Members of the crowd that have gathered underneath the perch at the Rotunda talk about Birmingham’s mysterious birdman.

On the 20th of May 2005, as part of the Fierce! arts festival, Belgian performance artist Benjamin Verdonck attached a nest to the side of the Rotunda building. He then acted out ‘The Great Swallow’- a seven day theatre performance 32 metres above the streets of Birmingham.

This continuous performance seemed to mostly consist of Verdonck standing in and on the nest, wearing a feather head-dress and spreading his arms wide. He became known as the Birmingham birdman.

On Sunday, 22nd of May, a giant egg appeared on the pavement in front of the Rotunda.

On Thursday the 26th, the final day of the performance, Verdonck was not seen in the nest. The egg was gone, but what looked like the scene of an accident had appeared in its place. The outline of a man, his arms outstretched, had been chalked onto
the brick paving. An ambulance stood nearby.

“Art to me is a game…” Verdonck told the Fierce! website, during his Birmingham performance. “The story is very simple – a man comes, he sees, tries to embrace his audience and falls out. People can choose not to get involved but no-one can say that they don’t understand the story.”

Fair enough. On Thursday afternoon, I asked members of the confused, squinting crowd that had gathered beneath his Birmingham city centre nest, for their reactions to Verdonck’s work. What story did they think he was trying to tell?

Dimsum: “My friends told me about him…”

When crowd-member Dimsum saw the chalk outline of a body (and what looked like) an ambulance, she said:

“No! I didn’t get a chance to meet him! My friends told me about him and I didn’t even get a chance to say hello. Do you know when the funeral is? I’m going to have to eat something now. Comfort food.”.

Ruth Hayes works for Birmingham City Council, she was looking up at the nest as she passed by:

“It’s quite interesting, isn’t it? It’s got people talking. And it’s bringing people to the Bullring, which has got to be good. If it was real and he’d really dropped off and fallen on the ground and killed himself, then yes I would feel sad about it – but I don’t think he has.

Natalie: “It doesn’t really have any explanation…”

Natalie was taking a photo of the nest. From Brazil, she’s studying at the University of Birmingham.

“I think it’s nice.” she said. “It’s a happening. It doesn’t really have any explanation – it just takes people out of their normal situation and make them think – it doesn’t really need to have a whole story. Everyone can make their own story.”

Derek and his workmates have been following the birdman’s progress all week. He was interested in what the nest was made of and whether the artist has been following health and safety precautions, saying: “Is he wearing a harness in there?”. He didn’t think the birdman was really dead.

“He’s a cuckoo” said Derek. “He’s gone off to lay his egg in another bird’s nest. He’ll be back around teatime.”.

Mr Singh had also stopped to look for the birdman:

Bill: “Did his clothes fall off when he fell?”

With arms spread wide, Bill Green was demonstrating to his friend Julie what the birdman has been up to. Looking at the chalk outline on the pavement and smiling, Bill commented:

“He fell in quite a good shape – cos that’s how he came out yesterday (outstretches arms) – he did look a bit shaky.”

“I think it’s terrible. To witness such a travesty is horrendous. We did see him come out yesterday, but er… (looking up at the suit hanging from the nest) did his clothes fall off when he fell?

Is it about man wanting to fly?

“Er, yes. I suppose from an aspirational point of view, it’s fantastic to want to be something you’re not. But not fantastic when you fall from 500 feet to your death. We are personally quite gutted that he’s dead.

“I think it’s bizarre. But it is highly amusing and intriguing. I heard everyone speak yesterday about ‘What the hell is going on?’. Has it enriched Birmingham city centre? It has made it more interesting.”

Emma was also looking up at the nest. She thought the artist was setting a bad example:

“Modern art is fine, but no man can turn into a bird unless his mum and dad is a bird. It’s a bit stupid innit? When you have some people standing up there, now, jumping, thinking they’re birds and then they die. He’s gonna set a bad example because
when you’ve got some high teenagers saying ‘I’m a bird’ and he jumps off and dies! How many people is he going to set a bad example for?

“It has made the city centre more interesting having people watching, but it’s a bit stupid saying he’s going to jump off.

What did Emma think had happened to the birdman?

“Is he dead? I’ve made up my own mind. He jumped and got splatted! And he’s just someone who’s mentally disturbed. I’ve got a photo of him from the other day on my phone. It’s his own fault – he shouldn’t have jumped. Or he’s gone through the window and hasn’t really jumped. It’s just someone who is good at drawing that has drawn that on the floor. A man can’t fly!”

Pam from Kings Norton, and friends, had just been to the cinema, to watch ‘Million Dollar Baby’, which they thought was much more entertaining than the birdman. One of the group, Mary from Sheldon, thought he may be protesting about something. But why was Pam taking a photo of the nest?

“Well it’s made it a talking point, I suppose.”

Were they sad he may be dead?

“I think it’s marvelous, it’s good. Lots of people come and see it. It’s a different culture idea. He thinks he’s a bird, but he’s not. We like to think we’re what we’re not. I feel a bit sad for him now, yes. God rest his soul.”

Lisa: “We’d welcome him back”

Lisa Moore and friend, from Aston, had both stopped to look for the birdman.

“I have been interested in it.” said Lisa. “Everyday we’ve walked past – cos we didn’t know what it was about. It’s funny really. We thought it was a publicity stunt. Just to get people to look and that – and they did! Cos we walk down here and everybody were looking up! It’s good really – got everybody’s attention.”

If the birdman could fly back to the Rotunda nest?

“Yeah we’d welcome him back. It would be nice.”

On Thursday afternoon many people gathered in front of the Rotunda, and looked up.

Oliver Duncan, a design student at Aston University, was one of them.

“It’s the first time I’ve seen the nest – bit of a shock really. It’s interesting. It’s quite cool. It’s worth a try, isn’t it?” said Oliver.

“How do we know we can’t fly unless we try it?”

The 2005 Fierce! arts festival continues until the 4th of June.